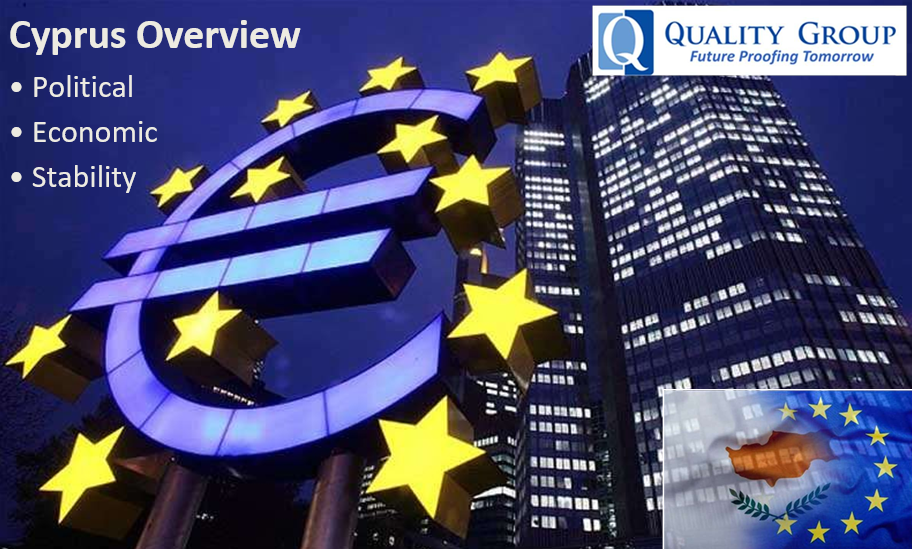 In 1974 there was a 24-hour war where Turkey invaded Cyprus. The pretext, to defend the rights of Turkish Cypriots. The result was that the island was divided into Northern Cyprus (only recognised by itself and Turkey) and the Republic of Cyprus, a constitutional democracy since 1960, recognised by the entire world. 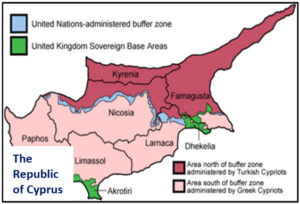 Since 2003, the UN monitored buffer zone, has been relaxed and there is now free movement between the Greek South and the Turkish North. Talks have been ongoing to reunify the Island. To date Turkeys conditions have been unreasonable with talks stalling. One of Turkeys ambitions is to join the EU; this will only happen if Cyprus is reunified as EU Greece and EU Cyprus would veto Turkeys admission into the EU. Cyprus has offered to create a federal government representing both sides with a rotating president and sharing in the emerging GAS boom!

The GAS finds in the EEZ in the Republic of Cyprus is adding economic pressure on a struggling Turkish economy as Northern Cyprus wishes to participate in the economic benefits of the GAS finds. The first supply contract has been signed and Cyprus and Israel will be delivering GAS in 2021 to Egypt. The deal is worth an additional €500 million in tax revenue for the Cyprus “taxman”

From 2022 the Cyprus domestic supply of electricity will include GAS. The electricity price to Cypriot residents will fall between 15% and 25%!

In 1960 after 80 years of British Colonial rule Cyprus was given independence by Britain. Terms included Cyprus enjoying special commonwealth status with Britain; and Britain acquiring two bases (Akrotiri and Dhekelia) staffed with 8000 permanent troops and the latest F35 fighter jets. The strategic value of the bases to Britain, the EU, NATO, and a base for replenishing the USA 6TH Fleet patrolling the Mediterranean cannot be underestimated.

EU Country. Cyprus became an EU member in 2004. Member states (27) have substantial security and defence co-operation agreements that have been put in place over the years.

British Bases. Of strategic military importance to the UK, USA, EU, and NATO 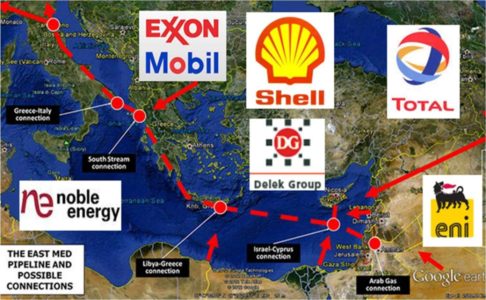 GAS Fields The recent gas finds in the Cyprus exclusive economic zone (EEZ) is of Global and European geo-political importance, with huge gas-field finds in Israel (Tamar Sands) and Egypt (Zohr). The proposed East-Med 1300km undersea pipeline valued at €uro 7,5 Billion will connect Cyprus to Israel and Egypt. The GAS undersea pipeline will go via Crete Greece, the boot of Italy and onto Central Europe; strategically replacing GAZPROM of Russia which has proved a troublesome GAS supplier.

Security. Cyprus is rated the safest country in the world for populations under 5 million and the 5th best relocation destination in the world to live in or retire in. (Knight Frank and Value Penguin) These ratings consider personal and country safety, lifestyle, healthcare, education, and the tax friendly environment where up to €19 500 income pa including rentals is tax free!

Tax & Cyprus. An EU regulated low tax jurisdiction. Personal income including rentals per taxpayer up to

Tourists. More than 80 airlines fly into Cyprus connecting with a further 147 countries. Close to 4 million tourists visit Cyprus annually as it is considered a value for money and secure destination. This makes Cyprus one of the most popular tourism destinations in the world with a 4 : 1 factor. (1 million population : 4 million tourists) Within 4 hours flight there are potentially 500 million tourists.

Business Friendly. Cyprus is the 2nd largest ship management country in the world. Cyprus is known for its well-educated workforce it, is a centre for financial services and a location to headquarter businesses and take advantage of a corporate tax rate of 12,5%.

Investors and Property. With one of the highest GDP growth rates in the EU and a superior quality of life it’s no wonder 1 in 4 property owners in Cyprus are international investors who view Cyprus as a safe haven and value for money investment destination whose strategic importance to the Western World ito. geo-politics grows daily. Cyprus economic importance has existed for thousands of years as it straddles the eastern Mediterranean trade routes.

Cyprus has a Bright Future

Often referred to as the Monaco of the Eastern Mediterranean; the GAS (clean energy industry) is destined to make Cyprus the energy hub of the Eastern Mediterranean. Cyprus commercially proven GAS will begin supplying in 2021. The first contract signed with Egypt will bring €500 million pa in additional taxes. The economic impact of GAS will bring in decades of growth and prosperity.

Global corporations like Melco Hard Rock Resorts International also believe in the future of Cyprus and are investing €550 million to establish the largest themed casino resort in Southern Europe; satellite casinos have already opened and the main casino will be operating within the next year. The industry will create 4000 new jobs and attract an additional 300 000 quality tourists. Previously there was no gambling in Cyprus. 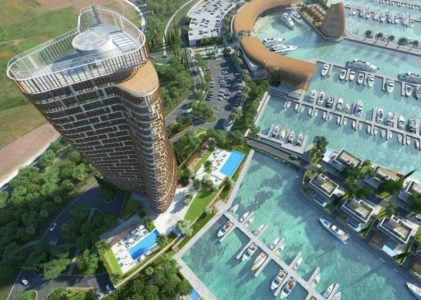 The Egyptian tycoon Naguib Sawiris has invested €200million in the development of the Ayia Napa Marina and Multiuse complex completing 2021. 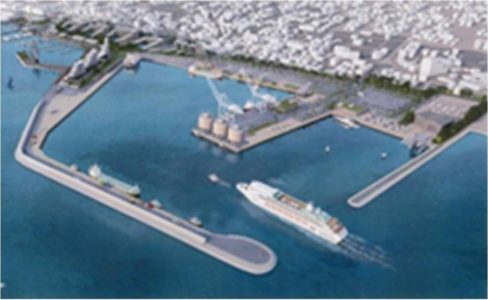 In March 2020, the Israeli-UK-Cypriot consortium signed to develop the Larnaka Marina and Port. This largest ever FDI of €1,2 Billion will take 10 years to complete and will increase Larnaka permanent population by 30 000. The complete regeneration of some 10km of waterfront will propel the region into the 21st Century. Cruise ships, the fastest growing sector of tourism worldwide will bring

30 000 to 35 000 new tourists. They will fly in/out and stay. Larnaka is the primary international airport into Cyprus