The maritime industry has been one of Cyprus’ most successful export services, with the island considered one of the top global hubs for ship owning and ship management services. Furthermore, our integrated maritime cluster comprises of companies involved in marine insurance, equipment suppliers, telecommunications, and ship bunkering. The country is home as well to some of the world’s most influential names in shipping such as the German-owned Bernhard Schulte Shipmanagement, the Russian Unicom Management Services, the Indian Fleet Management and Italian MSC Mediterranean Shipping Company. Today, Cyprus is the largest third-party ship management centre in Europe and the largest crew management centre in the world, while the island’s international ship register is the third largest in Europe and the 10th largest in the world.

In 2011, Cyprus confirms significant offshore reserves of approximately seven trillion cubic feet of natural gas. These reserves found in Cyprus’s Exclusive Economic Zone (EEZ) give rise to an ambitious energy strategy and create new challenges to our shipping industry. A whole new industry will be established in Cyprus to meet the needs of the offshore activities. It is anticipated that foreign shipping companies will relocate their offices and operations in our island in order to explore the benefits of the emerging East Mediterranean offshore market. According to a study by the Human Resources Development Authority, it is anticipated that more than 5000 jobs will be created in the hydrocarbon sector by 2019.

In the context of the development of indigenous natural gas deposits, the Government has initiated all necessary actions for the establishment of a Natural Gas Liquefaction Plant at Vasilikos. This Plant will include facilities for the liquefaction of natural gas and the storage and export of LNG by tankers for transportation to the international markets. It is an ambitious project of strategic importance that will also be the largest investment in the history of the Republic of Cyprus. It marks for Cyprus and its citizens a very positive outlook for economic growth, especially given the fact that it will be expandable to serve not only the Cypriot natural gas deposits, but potentially the deposits of our neighboring countries.

Pursuant to the provisions of the Regulations, three types of licenses are prescribed:

Cyprus can develop into an important Energy Center in the Mediterranean. New and vibrant shipping and energy projects can be launched and the policy that the Cyprus Government will implement will include Cyprus’s future maritime transport needs for our hydrocarbons. In its capacity as a full member of the EU, coupled with its strategic geographical location, our country can constitute a stable and reliable bridge of cooperation between the countries of the Eastern Mediterranean with Europe, Asia and the Middle East.

Cyprus is fully dependent on imported oil for its energy consumption and electricity generation. There are very low levels of diversity with regards to energy supply as oil imports dominate the market. The limited oil storage capacity of the country sets barriers to security of supply. The dependence of Cyprus on oil is expected to be reduced through the import of natural gas, up until the reserves offshore Cyprus are ready for exploitation, which is further expected to catalytically reduce dependence on oil. 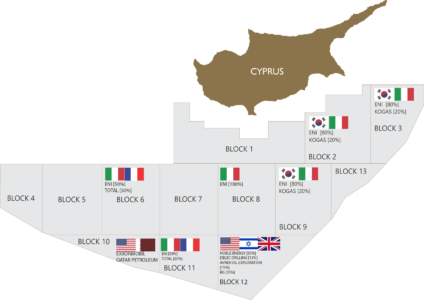